What threats do we face from the surrounding universe? The September issue of Popular Mechanics offers readers a complete list of dangers from space – from asteroids to supernova explosions, from space plagues to an alien invasion – with commentary from expert scientists.

This issue answers the questions of why modern science does not deny the possibility of the existence of a cosmic brain, if alcohol will be added to Russian gasoline and whether stewardesses can land an airplane. Fans of active water recreation will learn whether the Editor-in-Chief can manage a yacht and why Frenchman Bertie goes to sea on a half-sunken ship.

Science Fiction: stories by modern science fiction writers written specially for the magazine. This column opens with the story “The Problem of Dimensionality" by renowned Russian science fiction writer Leonid Kaganov.
Interview: readers learn about the people who “make" modern science and technology.
Laboratory: demonstrates the un-childlike possibilities of children’s toys.
Instructions: teaches readers how to use a variety of mechanisms.
Cross Cut: reveals how familiar objects look on the inside.

A national radio ad campaign will support the release of the September issue. Network and local radio spots will run for two weeks on such stations as Energy (Moscow), Nashe (network), Record (St. Petersburg and Novosibirsk) and Pilot (Yekaterinburg). The campaign also includes priority positioning of the magazine at press sales points in Moscow and other cities with million-plus populations, as well as banners and content ads on the Internet. 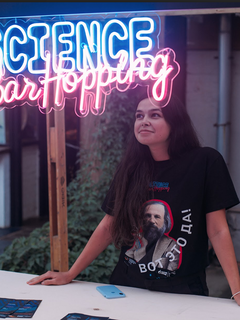