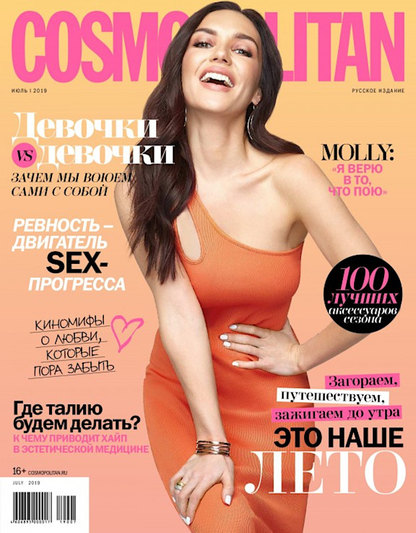 “This is our summer" Cosmopolitan proclaims in the July release, and issues a call to go sunbathing, traveling, and partying until early morning – while also offering tips on how and where to do them best. And as an aid to fashionistas, the magazine presents the 100 best accessories of the season.

Cosmo interviewed the singer Molly (Olga Seryabkina), who appears on the cover. Editors also spoke to actor and director Maxim Vitorgan, who recently staged a production of “In the City of Lzhedmitrov" with Alexey Kortnev in the leading role. Readers will also find Leonardo DiCaprio’s impressions of working with Brad Pitt on the set of Quentin Tarantino’s film “Once Upon a Time in Hollywood."

In addition, experts explain why it is best not to experiment with plastic surgery and cosmetology, and editors debunk movie myths about love and explain what internal misogyny is.