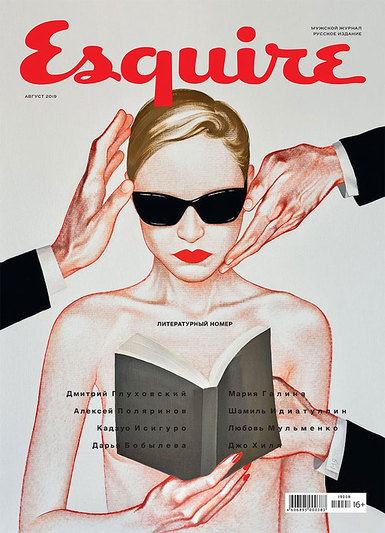 The August issue of Esquire magazine is traditionally devoted to literature. We are accustomed to thinking of genre literature — detectives, fantasies, thrillers — as pulp fiction, shallow, and frivolous. The editors decided to conduct an experiment and find out: can a genre book cover contain more than just a collection of formulaic plotlines?

At the request of this month’s guest editor, literature critic Galina Yuzefovich, Dmitry Glukhovsky, Shamil Idiatullin, Maria Galina, Alexei Polyarinov, and other Russian-speaking writers wrote stories especially for Esquire. Although formerly belonging to this or that “popular" genre, the stories go beyond the narrow boundaries of genre.

Also in this issue: translated into Russian for the first time, stories by Nobel laureate Kazuo Ishiguro and American writer and son of Stephen King Joe Hill who received the Bram Stoker Award, among others, for horror literature.

The cover of the new literary issue features the painting “A Love Story" created by Moscow artist Masha Yankovskaya especially for Esquire.